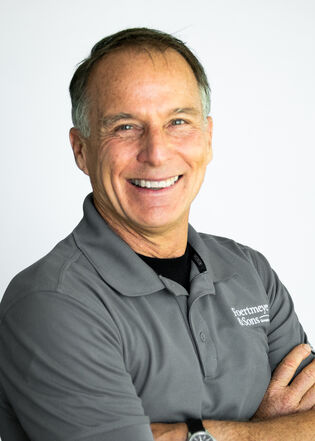 Mark’s horticulture journey began at the The Ohio State University Agricultural Technical Institute. In one of Mark’s classes, his professor mentioned an “outside of the box thinking” style. The professor mentioned selling plants and flowers through organized groups looking to raise funds. Because of this Mark was inspired to follow this path.

Once out college, Mark worked for a traditional fundraising company, learning more about the industry and eventually becoming very successful. After a few years, he decided that it was time to start a new journey; thinking back on his days in college, he opened Foertmeyer & Sons Greenhouse in 1988. He started with only two small greenhouses, selling annual flats and hanging baskets in the spring season. He quickly realized that his customers loved this new and different way of fundraising. They were no longer selling overpriced junk, but were selling beautiful flowers that could be enjoyed throughout the summer.

Since Mark’s opening of Foertmeyer & Sons 30 years ago, we have expanded to nearly 30 acres of growing space for our Spring and Fall programs. Mark’s inspiration has led to millions of dollars being earned by local communities, benefiting schools and organized groups.

Matt is a second generation grower and is now managing Foertmeyer and Sons Greenhouse. He attended the Ohio State University where he studied Crop Science with an emphasis on horticulture crops. After finishing his studies Ohio State, Matt worked in Germany at West Flowers.

During his time in Germany, Matt learned and practiced the advanced horticulture procedures they use overseas. Matt moved back home ready to translate his knowledge of new technology to our facilities. Matt is now using his passion for technology to create smarter irrigation booms. With this new technology, Matt is hoping to cut down on water usage and more efficiently manage his facilities.

Growing up around the greenhouse, Dan always knew he wanted to be involved in the family business. As an 8 year old, he set up a table at our retail location that had a sign that said: “Need help? Ask Dan!” Since those days his desire to help has not changed! Dan graduated from Franklin University with a degree in managerial accounting and business operations. He has interned under multiple, successful businesses before taking over business operations and customer service in 2009.

Eric the oldest of the Foertmeyer sons. He worked in the greenhouse through high school, and became a full time associate while he was in college. During his time working at Foertmeyer & Sons, he has learned many things along the lines of plant care, customer service, and salesmanship. Likewise, he helped produce and deliver plants, worked in our former retail store, and is currently one of our fundraising directors.

Living in Delaware, OH, Eric is happy married and loves working at Foertmeyer & Sons Greenhouse. He looks forward to meeting and helping people every new year and season.